You are here: Home / Business tax returns / How Taxes Work for PPP Loans 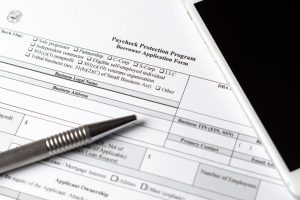 Sometime in the next few days, the Paycheck Protection Program, or PPP, will restart. We’re just waiting now for the President to sign the bill the House and Senate already passed.

For the millions of small businesses who have borrowed PPP money, the new law includes a windfall. The PPP loan money now counts as truly tax free.

But let’s dig into the details very quickly. Because small businesses want to get this right.

No Cancellation of Debt Income

The original statute always said this, by the way. But the IRS had found a backdoor way to make the PPP money taxable to most borrowers. And over the summer and fall, they’d issued several bits of guidance that said, basically, you need to pay taxes on the PPP money.

Congress reasserted their legislative authority here. No income from forgiveness!

Note: This earlier blog post is now out of date, but it describes the way the law worked before this latest bill.

Just to beat this thing to death:

Example of new accounting: Your small business got a $50,000 PPP loan. You spent the $50,000 on payroll and so get full forgiveness. And you also get to include the $50,000 as a tax deduction on your tax return.

In effect, every taxable PPP borrower just received a tax benefit equal to 10 percent to 37 percent of their PPP loan.

One final clarification appears in the law, thankfully.

The nontaxable cancellation of debt income a PPP borrower enjoys if she, he, or they follow the rules?

It adds to the partner or shareholder basis if the small business operates as a partnership or S corporation.

The new law provides the specific instructions your accountant will use, saying,

in the case of an eligible recipient that is a partnership or S corporation— (A) any amount excluded from income by reason of paragraph (1) shall be treated as tax exempt income for purposes of sections 705 and 1366 of the Internal Revenue Code of 1986, and (B) except as provided by the Secretary of the Treasury (or the Secretary’s delegate), any increase in the adjusted basis of a partner’s interest in a partnership under section 705 of the Internal Revenue Code of 1986 with respect to any amount described in subparagraph (A) shall equal the partner’s distributive share of deductions resulting from costs giving rise to forgiveness described in subsection (b).

Two quick examples to shine a light on this basis accounting business.

Example of a partnership: A partnership with two equal partners receives a $10,000 PPP loan. If the partnership receives full forgiveness of the loan, each partner receives $5,000 of basis.

The timing of the basis adjustment? Three thoughts here:

We have a couple of blog posts over at Evergreen Small Business, our popular blog, that may be of interest to you:

PPP Loan Amount Increases describes how you may be able to go back and get more money if you were short-changed by the bank on our original PPP loan.